The illusion of change. A citizenry’s perspective on governance in Angola 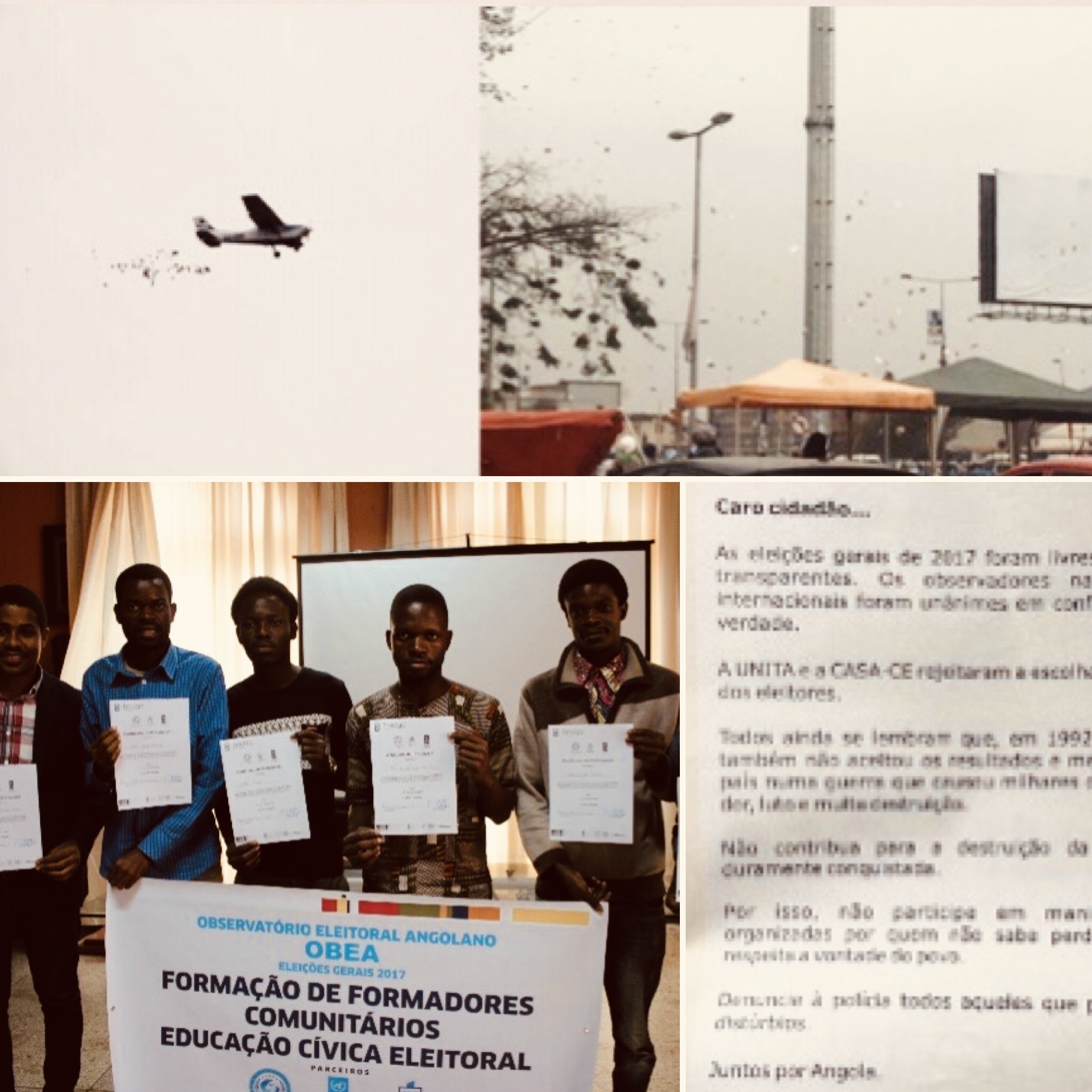 In 2017, the MPLA won the elections with 61,7% of the votes, followed by UNITA with 26,71%. This was the poorest result that MPLA had since 1992. The 2017 election was deeply shaped by the stepping down of José Eduardo dos Santos, president of the MPLA, the ruling party since 1975, and head of state since 1979. João Lourenço, a former general and ministry of defense, became then the new leader of the party and the new President. This change in the national political leadership was met with enthusiasm and fostered high hopes for a more democratic rule and a chance to fight off endemic corruption. It was seen as a sign of a new era that would benefit an increasingly impoverished and rights deprived population.

In that context, the Catholic University of Angola’s (UCAN) Social Sciences and Humanities LAB coordinated the project “Monitoring governance in Angola: From 2017 elections to governmental action”, funded by Open Society – Angola (OSISA)[1]. Its main goal was to understand how citizens evaluated the electoral process, to identify their expectations regarding the new government and finally their critical assessment of its performance. To achieve this objective, the research was organized in three phases[2]. The results from a pre-electoral survey (first phase) demonstrated how hopeful Angolans initially were regarding a meaningful change in governance. Days before the election, 42,9% of respondents expected an overall improvement in democratic life: more freedom, transparency, justice and democratic values; 24% expected some kind of change, with or without party alternance. Six months after the new executive took office, as shown by the results of a national survey (second phase), 54,8% of respondents – the majority – considered that the elections results didn’t correspond to their expectations because the electoral process overall lacked credibility (34,1%)[3]. A third survey was conducted in November 2018: 80,4% of respondents considered that the new government was “different” from the previous one. From this total, 27,1% considered that the new executive was more transparent and allowed more freedom and participation and 23,1% considered that the difference was related to Lourenço’s policies against corruption.

Yet 19,5% respondents didn’t identify any difference. For them, ‘change’ had become an illusion given the unchanging nature and supremacy of the ruling party: 82,3% of these respondents argued that Lourenço and dos Santos, the former president, shared the same style of governance and felt no confidence with what was seen as a mere formal change of leadership.

Hope was high in Angola in the eve of 2017 general elections: 79,8% of respondents of the second survey expected the improvement of the economy, 64,7% the reduction of poverty and 83,4% expressed confidence in the future. Despite frustrated expectations, 47,9% of respondents asserted that the new government was better than the previous one. Still, skepticism also remained for a large part: 35,5% of respondents considered that there was no difference between the new and the old government, or that the difference was minimal. This seemingly paradox may be better understood if one takes into consideration other mechanisms of social trust, such as those related to religion and, specially, to a sort of popular nationalist metanarrative, according to which Angola is a rich country whose potential will sooner or later be fulfilled.

Mistrust is a key factor to understand the critical positionings expressed by this survey: 78% of the respondents, for example, considered that the executive didn’t allow for much participation and inclusion, 78% considered the executive ‘undemocratic’ or ‘with a minimum level of democratic performance’, and 83% respondents expressed the opinion that the government was ‘not transparent’ or ‘not very transparent’. The negative depiction of Lourenço’s government signals not only the resilience of a suspicion climate, undoubtedly related to the decades long experience of authoritarianism, but also a negative evaluation of the executive’s overall performance and the difficulties it faced while trying to differentiate itself from dos Santos era.

Change as an illusion

The first year of the new government was characterized by the swiftness with which massive exonerations took place – some of them affecting key elite figures considered till then as untouchables. Lourenço’s government sought to identify itself as the one inaugurating a democratic era for Angola. Hope for change stayed on and some indicators showed an improvement in citizens’ assessment regarding government performance: 44,7% of respondents pointed out the “fight against corruption” as the first political measure of the new government during 2018. Yet,19,5% respondents didn’t identify any difference between the new and the previous executive. For them, ‘change’ had become an illusion given the unchanging nature and supremacy of the ruling party[4].

There is a significant awareness in Angola of the many limits that the policy against corruption unveiled: the fight turned out to be highly selective and mainly targeted against public and political figures closely related to dos Santos. The dominant perception was one in which neopatrimonialism and clientelism continued to function as a more or less latent or even explicit logic of formal politics. In general terms, 54,3% considered that the executive didn’t allow for much participation and inclusion, 57,2% think the executive ‘undemocratic’ or ‘with a minimum level of democratic performance’, and 58,8% believe that the government was ‘not transparent’ or ‘not very transparent’. Definitely, hope for change appears to be anchored less on formal politics and institutions and more on alternative mechanisms of social trust.

Living in an emergency state since March 2020, with a collapsing economy, rampant unemployment and deteriorating social development indicators, Angola is at a crossroads. Being an oil dependent economy, the continuous downfall of this commodity price in the international market since 2014, an unleashed public debt and the critical worsening of life standards, without any major and structural public policy to combat poverty and cumulative inequalities or foment a non-oil economy concurred to an increasing distress and social tensions became even more apparent. The COVID-19 pandemic operated as the last throw of the dice.

In this context, recent popular protests have been met with increasing repression and the autistic posture of the government exposes the pitfalls and limits of a purely formal democracy divorced from basic human rights.[5] The Cafunfo massacre on January 30 2021 of unarmed protesters in Lunda Norte Province is the culmination of the violence with which authorities react to a citizens public manifestation to demand better public services, including water and electricity, for the province that ensures millions of USD through its diamonds.[6]

The divorce between formal democracy and a concrete human rights ethics is also manifested in the abstention rates. In the 2012 general election (for legislature and for the presidency), abstention reached 40%. In 2017, the formal rate of abstention was only 26% but this is an apparent decrease, since 4 to 4.5 million voters didn’t update their electoral card or didn’t register themselves to vote. In this perspective, abstention may be seen as an active form of protest against a political regime and its institutions which do not inspire trust.[7] It is the Angolan youth who is currently articulating this social discontent: change is not a matter of political leadership; 45 years of the same ruling party is, in their eyes, the key obstacle for change; until then, change will apparently remain an illusion.

And so, will democracy.

[1] The project was conducted by a multidisciplinary research team, encompassing the School of Economics of the Catholic University of Angola as well as the Angolan Electoral Observatory. In addition, more than 30 community based civic organizations throughout the country have participated in this project.

[2] The first one devoted itself to build an understanding of citizens’ expectations and perceptions regarding the general elections held in 2017. It consisted in a pre-electoral national survey, conducted in August 2017 (1699 inquiries). The second phase was conducted in May 2018 through a new national survey in order to monitor citizens’ positionings regarding the first 6 months of the new executive (1689 inquiries). Finally, the third and final national survey was held in November 2018, when the new Angolan executive completed the first year of its mandate (1662 inquiries).

[3] It is worthwhile noticing that 45,1% of the respondents expressed the opposite opinion. However, the main reason for that positioning was the fact that people already expected the MPLA’s victory (47,2%).

[4] 82,3% of these respondents argued that Lourenço and dos Santos shared the same style of governance and felt no confidence with what was seen as a mere formal change of leadership.

[7] It is worthwhile to recall the 2020 Democracy Index findings. Based on five categories  (electoral process and pluralism, the functioning of government, political participation, political culture, and civil liberties), the Index classifies Angola as an “authoritarian regime”. The country occupies now the position n.º 117 in a list of 165 countries. Its classification has worsened: 3.66 points in 2020 against 3.72 in 2019.

[8] Correcting what is bad and improving what is good? A citizenry’s perspective on governance in Angola. The title is inspired by MPLA’s political motto for the 2017 elections.