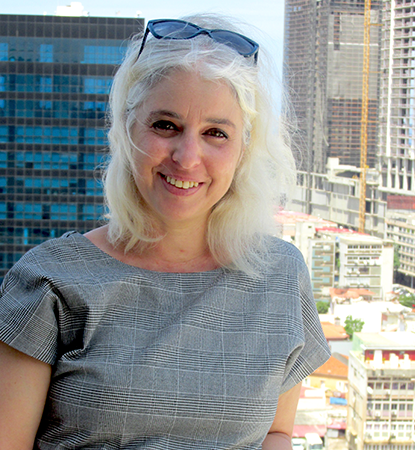 Catarina Antunes GOMES is co-Director of the Universidade Católica de Angola’s Laboratório de Ciências Sociais e Humanidades (LAB), which is member of the Council for the Development of Social Science Research in Africa CODERSRIA, the Consortium of Humanities Centers and Institutes (CHCI)  and the African Studies Association of Africa (ASAA). She is also international consultant and trainer in social and public policies, mainly for UNICEF and the European Union.

Catarina is an expert specialized in social and cultural anthropology. She has taught and developed research projects for more than 18 years in universities such as the Universidade de Aveiro, the Universidade de Coimbra in Portugal, as well as the Universidade Agostino Neto and the Universidade Católica de Angola. A speaker at multiple conferences and seminars in diverse African universities, she frequently participates in international events. Her publications include the book African Citizenship Aspirations (New York: Routledge. 2018) which she edited, the article On freedom, being and transcendence: the quest for relevance in higher education (Journal Kronos. Special Issue # 43. University of Western Cape Town. South Africa. 2018) and The good silences: the absolute value of the future (in Dynamics of social reconstruction in post-war Angola. Arnold Bergstraesser Institut, 2016).

Born at Aveiro, Portugal, Catarina holds a PhD in sociology, with specialisation in sociology of the State, Law, and Administration, from the Universidade de Coimbra. She has also pursued a postdoctoral research in postcolonial studies au Centro de Estudos Sociais (Portugal). She is a cofounding member of PAZSOS. She speaks Portuguese and English.